The Trust brings out a monthly magazine for children called Children’s World. It is one of the oldest magazines for children in English, now in the 50th year of publication. The magazine encourages creative talent in children and provides a training ground for upcoming writers enthusiastic to enter the field of children’s literature.

The magazine has its beginnings in 1968 when Shankar decided to publish the spill over entries that came in Shankar’s International Children’s Competition in a weekly illustrated magazine. The inaugural issue was formally released on January 23, 1968, by the then Union Finance Minister, Shri Morarji Desai. The magazine was brought out as a weekly for four years. Subsequently, owing to mounting costs of paper and production, it was decided to convert it into a monthly. The first monthly issue was published as the Annual Number in March 1972 and the magazine has since remained a monthly publication carrying features, stories, poems, book reviews, crossword puzzles, and child-related activities sent in by child contributors and grown-ups. More colour has come in steadily into its pages. Two special numbers are released every year in April and November. The November issue exclusively comprises prizewinning articles from the Your Pages Competition held in the magazine annually. The Competition is announced in the May issue and the last date is July 31. 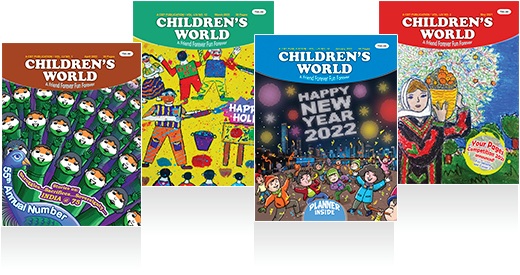